One of the things that make food so interesting is that they are so universal.  Food is a shared human experience, everyone has experienced it in one form or another.  Because it is necessary.  Because it is essential to life.  When you get down to basics, when you have nothing else, only a few things remain important for survival.  Food is one of the more important of these.

Because food is so essential, it tends to be central in many ways.  In particular it tends to become the centre of cultural and social traditions.

Because eating is, when possible, a daily occurrence or multiple daily occurrences, it has a tendency to become a central point of social interactions.  A couple goes for a meal for a date.  A family gets together for a family meal.  A church has a potluck.  Certain snacks are enjoyed when people get together to watch sports.  Certain foods become mainstays at sporting events.  Students gather for food at lunchtime.  Neighbours are invited over for meals.  Food is served at wedding receptions or after funeral and memorial services.  Food is served at baby shows or bridal showers.  Food is integral to many, likely most, social and cultural gatherings.

With the continuous centrality of food, cultural traditions grow.  This is why we have ethnic foods.  Only certain foods are available, or were before the global economy reached its height, in a given area.  The presence or absence of types of animals or plants or herbs set certain parameters on food.  Within these, people shared, and still do.  If I make a meal and you come over and like it, you might ask me how I made it, or go home and experiment to figure it out.  You might invite another friend or neighbour over, and they might do the same.  Recipes, techniques, ideas, and types of food grow, become more common, if enough people like them.

And this is where it would stop, if communities were isolated.  But tea was brought back from Asia to Europe.  Potatoes were brought back from Central America to Europe.  And so on.  When goods are exchanged between villages, cities, regions, continents, ideas go with them.  And these are all spread by people.  Where there are people, there is food.  So we find Chinese food restaurants next to Irish pubs next to Indian restaurants next to Mexican restaurants, all over the world.

Immigrants, of course, are part of this.  When people move, they bring their traditions with them.  The techniques and types of food are transplanted with the people.  But some things aren't available, so food changes.  People adapt them to where they are.  Or they incorporate things from those around them into the foods the know.  Foods change, both with time and with distance, as people interact, and setting changes.

Because of this, foods that were once characteristic of one place are found in other contexts.

Also very interesting are food parallels between cultures.  Some ideas in cooking are so universal that they develop independently in parallel circumstances.  Some of these are more obvious than others.

Take for example stir fry in South East Asia.  Compare this to fajitas, originating on the Chapparosa Ranch near Del Rio, Texas.  Originally thinly sliced skirt steak marinated and grilled, often more recently grilled with vegetables in a way that is not that different from stir fry if you only look at the basics of each, even though there is no evidence of any influence from the older stir fry to the newer fajitas.

Or the flat breads of Eastern Asia, the Indian Subcontinent, Middle East, Turkey, and Europe, which developed over many centuries, possibly in independence for other parts of these regions.  The corn tortilla, coming not from European flat breads but from pre-European native corn flat breads.  Or the similar but somewhat different flat breads of some northern North American native peoples, like the fly bread of the Arapaho and Cheyenne, or the forms of bannock found among First Nation tribes in Canada.  While European influence on these is debated, the form is somewhat different from its Scottish counterpart from which the name comes.  Flat breads of all types are basically doughs made fro flour with water or oil or animal fat, with no yeast or other leavening agent added.  Non-rising bread.

Or the gyoza of Japan and similar dumplings throughout South East Asia.  These are dough forming a pocket around some sort of filling.  A filled pasta, basically.  Similar in concept are the filled pastas of Italy, including ravioli and tortelloni.  But one Italian one more similar in form is the agnolotti of the Piedmont region, which, like the Asian dumplings, is made from circular dough pinched along the curve around a meat or vegetable filling to make semicircular filled pasta.  These aren't the only pasta, or dumplings, with this form. 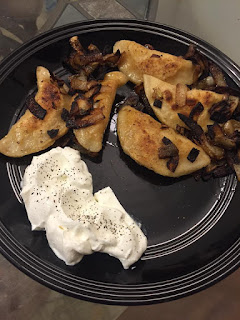 Throughout Eastern Europe a similar food is found, called pierogi in Poland and varenyky in Ukraine, with the Western Ukraine regions often using the spelling pyrohy for the Polish name instead of or in addition to varenyky.  These also are a round dough pinched around a filling.  As the peoples of these regions spread, they brought their food with them.  In particular, Ukrainian immigrants brought these to Canada, where they have grown into a much wider use than just the immigrants, especially in the Western Providences.  Canadian Ukrainians favour the name pierogi, and this is the most common name used in Canada.

On Christmas Day, I had the pleasure of being taught to make these by my amazing fiancée, and made them with her.  I then made them by myself on New Years Eve.  They are my new favourite food to make and to eat.

Essentially, they are cheese mashed potatoes wrapped in a circular pasta like I described above, boiled, then fried with onions in butter, the way she taught me.  They are then dipped in sour cream flavoured with some salt and pepper.  I love how simple them are, and how the flavours come together.  Truly an amazing food.


The first taste,
Rich,
Complex,
Simple beyond words,
Onions and butter,
Potatoes and cheese,
The pasta amazing,
Joining,
Bringing together,
Onions and butter outside,
Potatoes and butter inside,
Separated,
Coming together,
Joining,
Perfect,
The hot steamy filling,
So perfect,
The potato balancing the cheese,
The cheese balancing the potato,
The secret,
Hidden within,
Hidden in the pasta,
Like a treasure,
Like a secret,
Like a universe of taste,
Almost too hot,
Just right,
Steaming as you bite it open,
The pasta,
Crisp on the outside,
Soft on the inside,
Perfection in taste,
Perfection in textures,
The imperfections in shape,
The perfect imperfections,
The outside,
Rich with butter,
Rich with onions,
Fried to crispy goodness,
So amazing,
So good,
The sour cream,
The perfect accent,
Smooth,
Fresh,
Seasoned with just the right amount of salt,
Seasoned with just the right amount of pepper,
The colours,
The white of sour cream,
Speckled in black pepper,
The white and brown,
Of onions fried to perfection,
The pasta white and golden,
Dappled,
Perfect,
Matching the risng smells,
So delightful,
So perfect,
Like no other smell,
Bringing to mind,
So many things,
Large families and laughter,
People talking and laughing,
Homes and hearths,
Kitchens and gatherings,
All things perfect,
Life,
Lived,
Family,
Community,
In a house filled,
The smells and tastes,
The delight in such a simple food,
So complex,
So rich,
Pierogi,
Real pierogi.

Posted by Bethany Davis at 2:48 AM

Also Find Me At